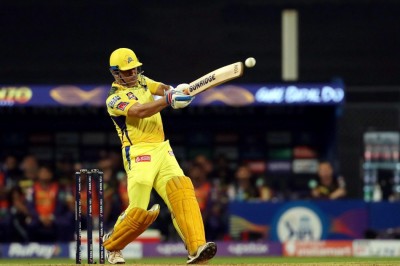 The world saw the same old avatar of Dhoni:In this match, Mahendra Singh Dhoni showed the power of his bat as soon as he came on the field and hit a superb monster six on the third ball of Avesh Khan’s over, seeing which all the fans filled the field with the echo of Dhoni-Dhoni. Dhoni not only started his innings with this six but also created history. Actually, before this match, Mahendra Singh Dhoni had never started his innings in the IPL with a six, but in this match, he sent the ball on air travel outside the boundary line as soon as he arrived.

The opponents were blown away by hitting ‘monster six’:

Let us tell you that in this match, Dhoni scored 16 runs in six balls with the help of two fours and one six. MS Dhoni was on the crease on the last ball of the Chennai Super Kings innings, then he ended the innings by hitting a four. Due to this cameo of Dhoni, the team of Chennai Super Kings was able to score 210. Mahendra Singh Dhoni has completed 7000 runs in T20 cricket with this innings. MS Dhoni has played a total of 349 T20 matches so far, in which he has 7001 runs to his name. MS Dhoni averages 38.68.

Dhoni gave many historic moments to the Indian team:

Let us tell you that Mahendra Singh Dhoni took over the captaincy of the Indian team in the year 2008. While facing all those challenges, Dhoni gave many historic moments to the Indian team. India tasted the taste of becoming number one in Tests for the first time under Dhoni’s captaincy. Under Dhoni’s captaincy, India has won the title of ICC World T20 (2007), Cricket World Cup (2011) and ICC Champions Trophy (2013). In the year 2020, Mahendra Singh Dhoni had retired from international cricket, although he is still playing in the IPL.