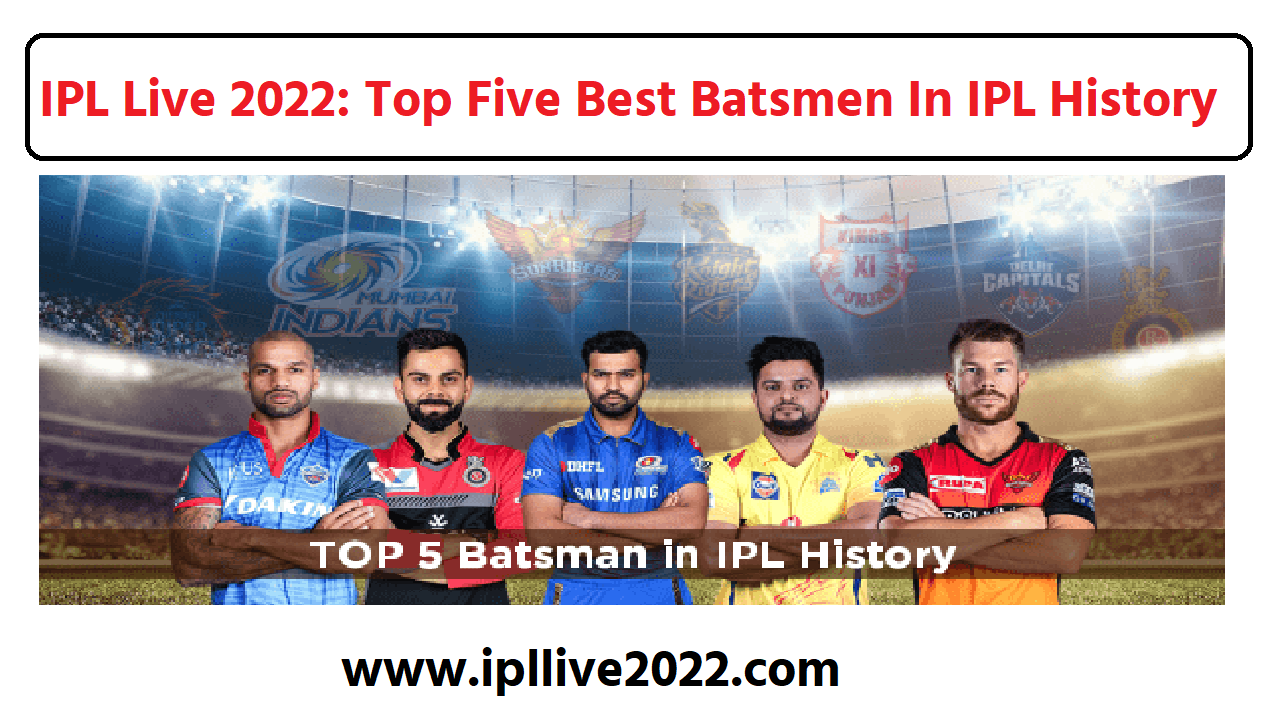 Indian Premier League is one the biggest T20 league across the globe in which the Indian players as well as overseas players come and take part. Every professional cricketer dreams of playing in IPL for once in his life. It has undoubtedly become the breeding ground for the talented and exciting cricketers that have helped other countries to find new faces that can help their side in international assignments.

It is good to be part of this T20 tournament but the important thing is to maintain consistency with the bat and ball. However, it is quite difficult to do so for a long time. This has been a major reason behind some players losing their place in the team that indirectly forced them out of the limelight.

Many big players like Sachin Tendulkar, Virender Sehwag, and Sourav Ganguly have so far featured in this cash-rich league. And it is a very difficult task to pick the top 5 batsmen in the 12-year-long history of this tournament.

For his jaw-dropping consistency to score runs in important games, one has to accept a fact that David Warner thus far has been the finest batsman in IPL history. Beginning his career in 2009 with the Delhi Capitals, Warner first scored 400-plus runs in his final season with the Capitals in 2013 and his standard never came down.

For a record-breaking five consecutive seasons, he scored more than 500 runs in an edition and won the orange cap thrice (More than any other player). He also led the Sunrisers to a title win in 2016 and in his comeback season the last edition, he hammered 692 runs in just 12 knocks, which included 9 scores of 50 or more.

Virat Kohli’s progression in the tournament wasn’t as consistent as Suresh Raina’s or David Warner’s, but after he was made the captain of the Royal Challengers Bangalore, he’s been batting at a level very few have played in this format. If not for his first three or four seasons, he perhaps could’ve topped this list.

Kohli, in the company of Chris Gayle and AB de Villiers, mounted huge totals for fun and made RCB the hub of entertaining cricket. He came close to triumph in the tournament but fell short. He won the Orange Cap once in 2016 where he scored 977 runs in the season, most by a batsman in a single season.

Kohli is the highest run-scorer in IPL history, with 5,412 runs to his name at an average of 37.84. He scored five centuries and 36 half-centuries and is second on the list of most fifty-plus scores in the tournament, only behind the Australian talisman David Warner.

The Chinna Thala of IPL’s most successful franchise, Suresh Raina is one of the most loved cricketers in this country, especially in Chennai and Tamil Nadu. His remarkable consistency in amalgamating runs over the course of 12 seasons made him CSK’s most prolific figure besides their main man MS Dhoni.

Raina is the second-highest run-scorer in IPL, with a staggering 5,368 runs in 189 innings and was the first player to complete 5,000 runs in the tournament. He’s also the most capped player in IPL history, with 193 games to his name.

It’s hard to imagine the Royal Challengers Bangalore without the flabbergasting contribution made by Chris Gayle to improve their brand value. The legendary Jamaican joined them in 2011 after spending the first three seasons with Kolkata Knight Riders and the rest, as they say, is history.

He won two consecutive orange caps in 2011 and 2012 and scored more than 700 runs in 2013 as well. He holds the record for the most sixes in career, most sixes in an innings, most runs scored in an innings and most centuries in the tournament, already establishing his legacy as an IPL legend.

Gayle amassed 4,484 runs in just 125 matches and will be eager to add to that value with the Kings XI Punjab next season. His average too is pretty staggering at 41.13 and is the only batsman apart from AB de Villiers with a strike-rate more than 150 (More than 3,000 runs).

The only captain in the history with four IPL titles, the only player in the history with five winner medals – Rohit Sharma is perhaps the most decorated name in IPL history. The third-highest run-scorer of the IPL, Rohit’s stint for both Deccan Chargers and Mumbai Indians have been equally memorable.

Rohit was named the best emerging player in 2009 when Deccan Chargers lifted the title and in 2011, Mumbai Indians signed him for a huge amount, but they never have repented even once. He’s been scoring runs when needed and leading by example in critical situations, making Mumbai the most triumphant franchise in the tournament’s history.

Rohit is on the verge of completing 5,000 runs in the tournament, currently standing at 4,898 in 183 innings. He scored one century at the Eden Gardens and 36 half-centuries, making him one of the most productive players of the tournament.

1.Who is the number one batsman in the history of IPL?

2.How many runs did Gayle score in just 125 matches?

3.Who Is Second Highest Run Scorer In IPL History?

4.How much runs did virat kohli makes in ipl history?